Ahh so this is apparently Australia's #1 restaurant and #32 (at the time we went it was actually ranked something like #21) in the world? Our dining experience here would definitely suggest otherwise.

We eat out a lot and we've dined at our fair share of 'high end', Michelin starred/hatted/Restaurant magazine 50 Best restaurants so we like to think we know a good restaurant experience when we see one, and this was definitely not one of them. Even if it wasn't $200 a head excluding drinks, it still wouldn't have been a pleasant experience. 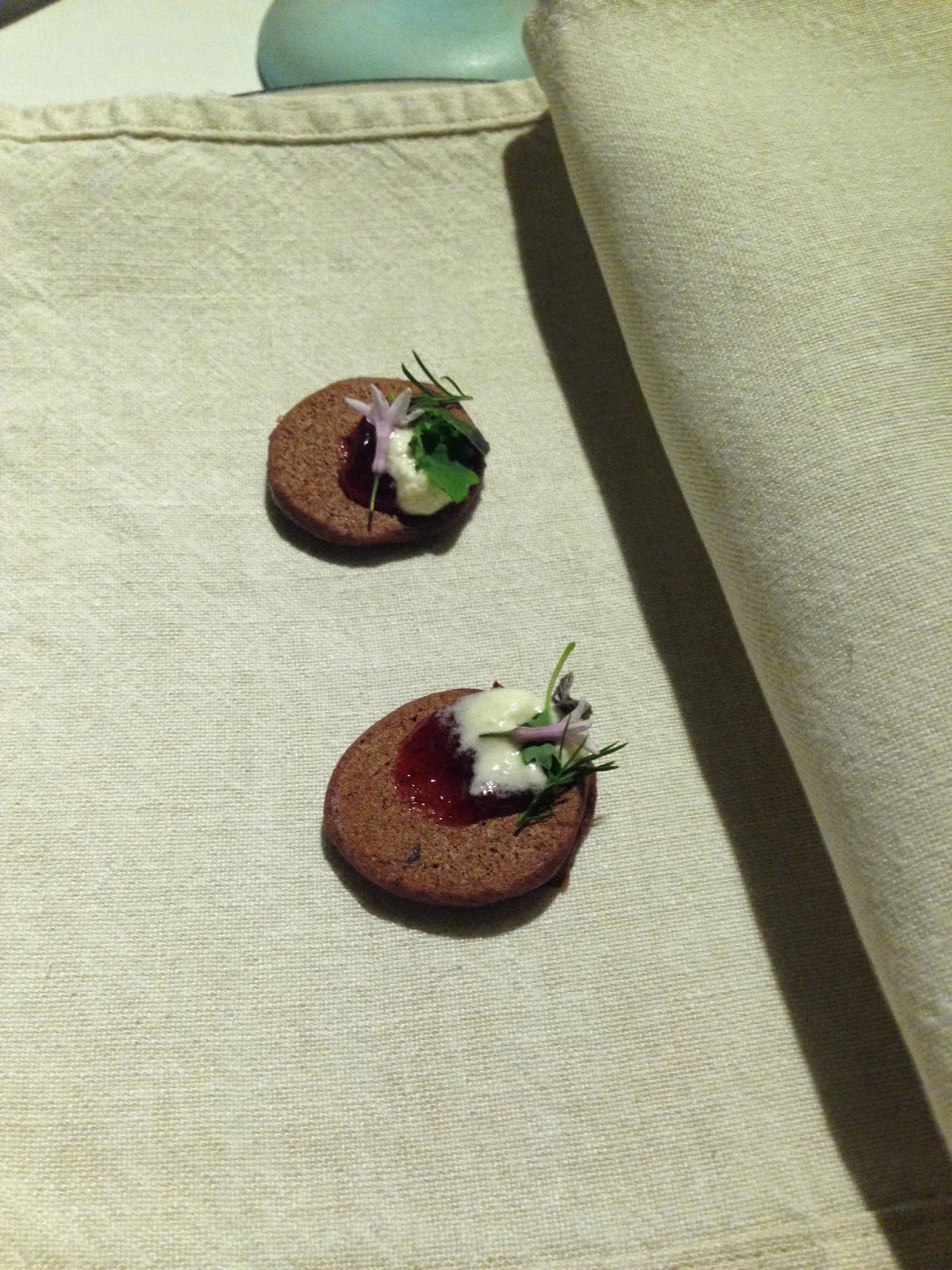 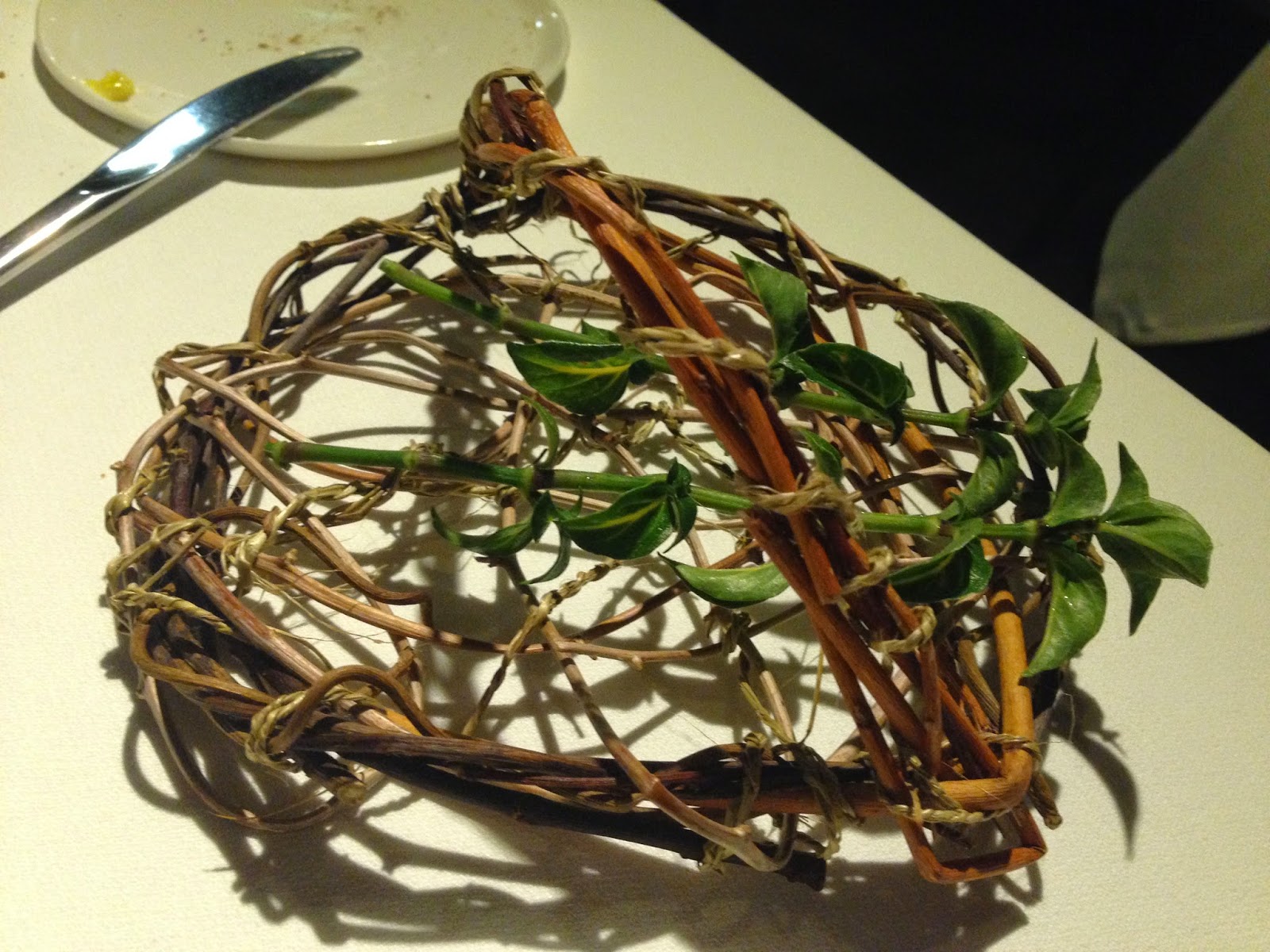 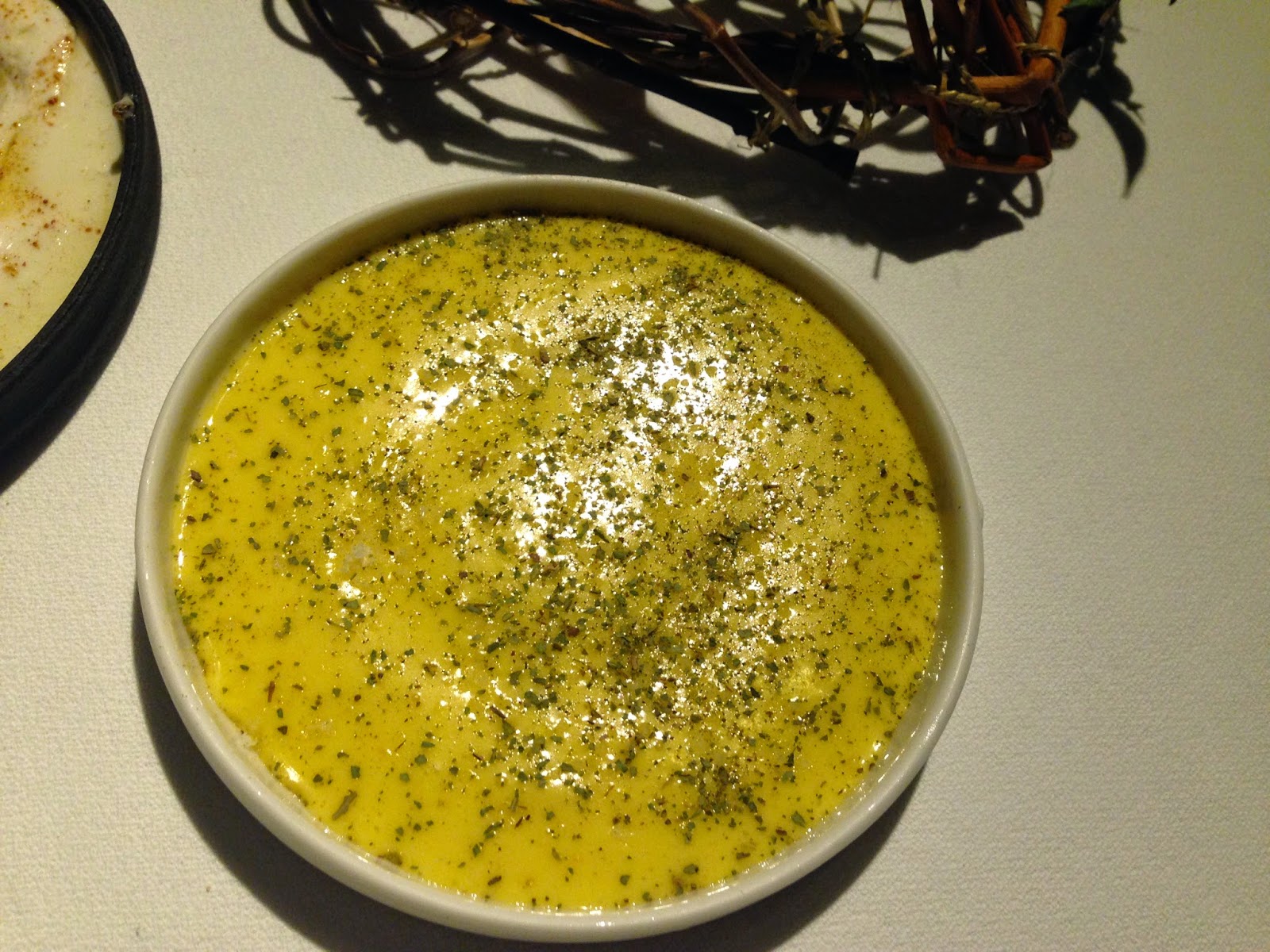 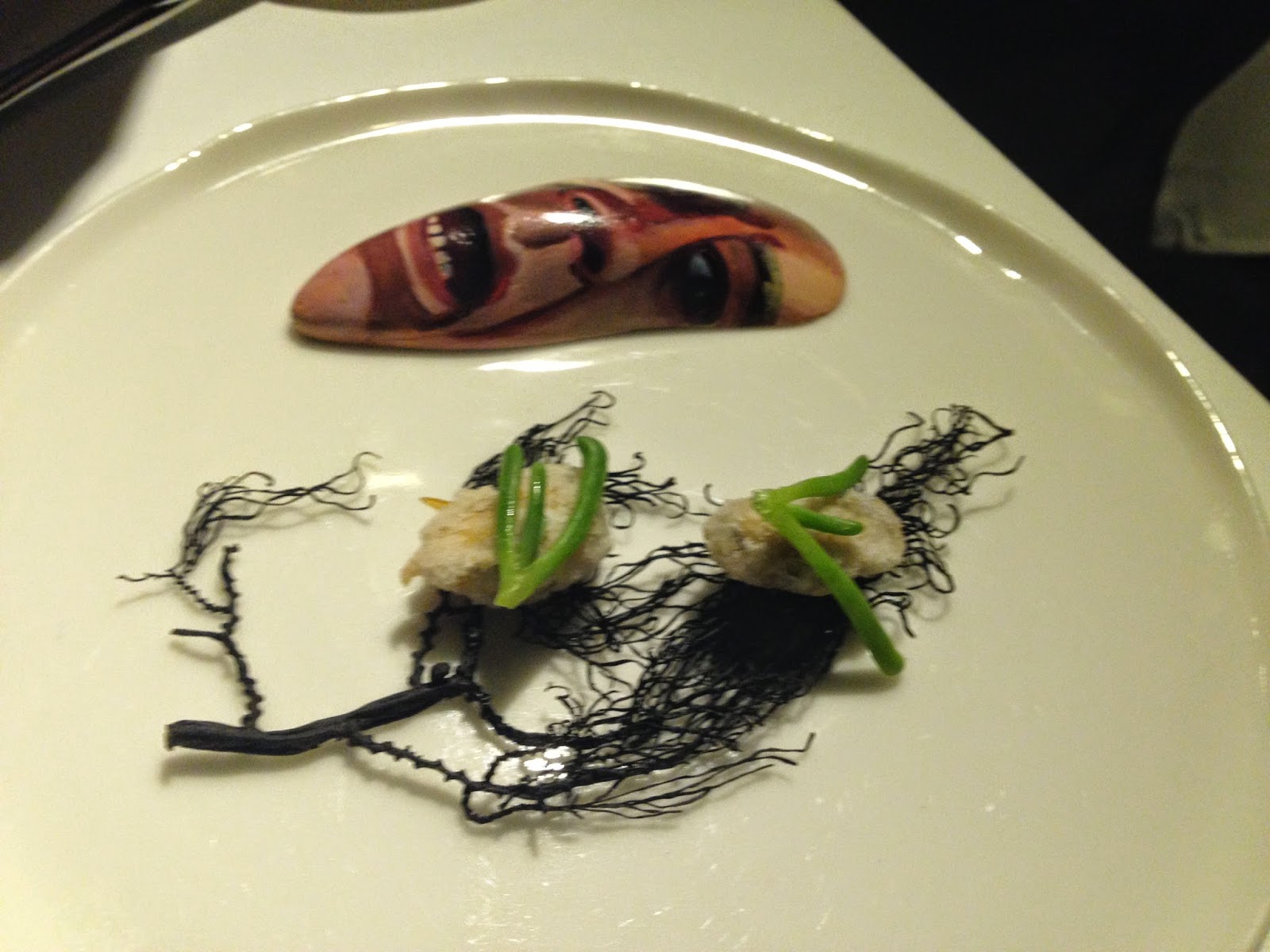 As with all these degustation menus, we started off with a few amuses-bouches. The first of these was a Wallaby blood plum jam blini-like thing which was perfectly adequate—not disgusting but certainly not very interesting or mind-blowing. We also had some battered fried mussels with a sea succulent, definitely not samphire but possibly seablite? These little morcels were pretty tasty and I particularly enjoyed the addition of a sea succulent, something I think we should definitely eating more of. Finally we had 'rotten corn' to dip these baby leaves/stems in. These were delicious and I would love to know what those leaves were, I definitely don't recall our waiter telling us. 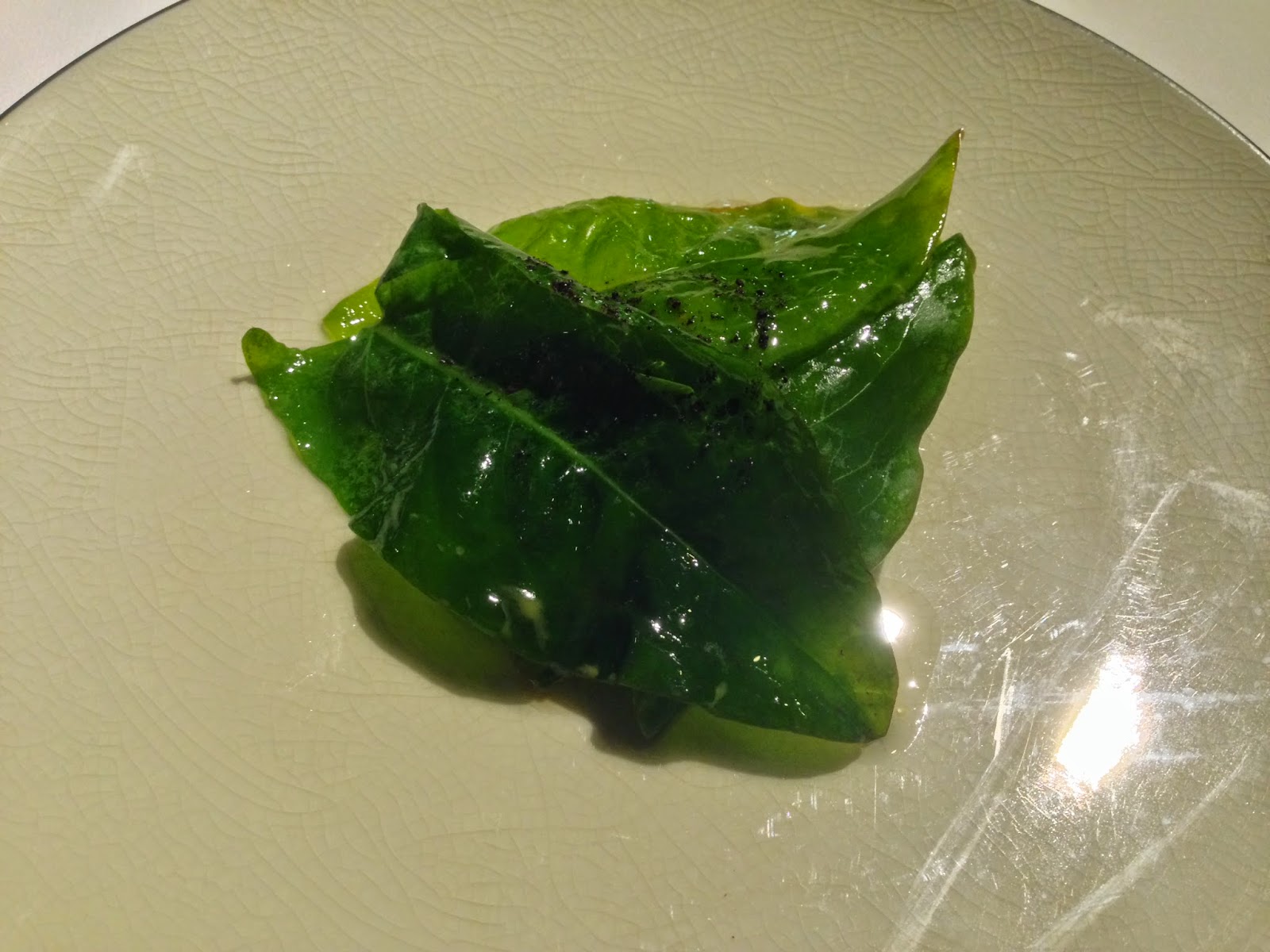 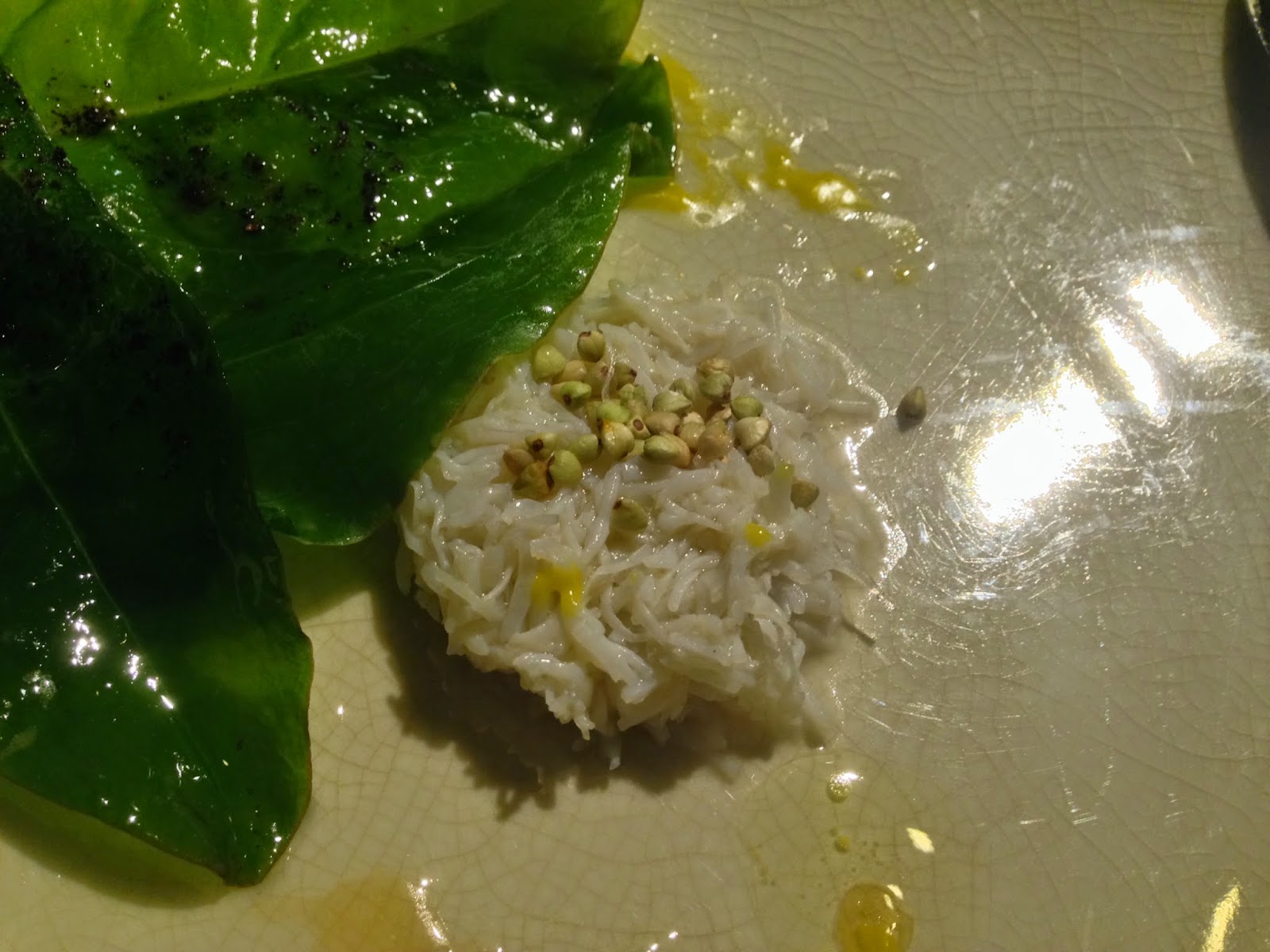 The next course I was incredibly excited for: snow crab with sour leaves. As heavily hinted by the blog name, I am a huge fan of WA snow crab (also called crystal crab), miles ahead of the Alaskan variety and even better when you have them in WA (they lose some of its plumpness in transit to the other side of this continent even though they're kept alive) so imagine my disappointment at eating this bland and frankly not very tasty dish. M and I rather hilarious overheard a guy sitting next to us at Movida Aqui describing this dish at Attica as snow crab which has been dessicated. He was obviously getting confused with dessicated coconut which is usually grated and dried, sorta resembling this crab. Obviously this crab hadn't been dessicated (meaning dried: if you're reading this, man at Movida Aqui), but it might as well have been for all the flavour and excitement it brought to the table. Great snow crab is super sweet and flavoursome, it is something I insist on ordering whenever it is on the menu, usually at a good Chinese restaurant. However, Ben Shewry's version was frankly, in my opinion, wasting an amazing ingredient. The sour sorrel and verjuice/grapeseed oil were frankly just not good accompaniments to the crab and did nothing to bring out the delicious natural flavour of the main ingredient. The little buckwheat things also nearly broke my teeth and got stuck there. 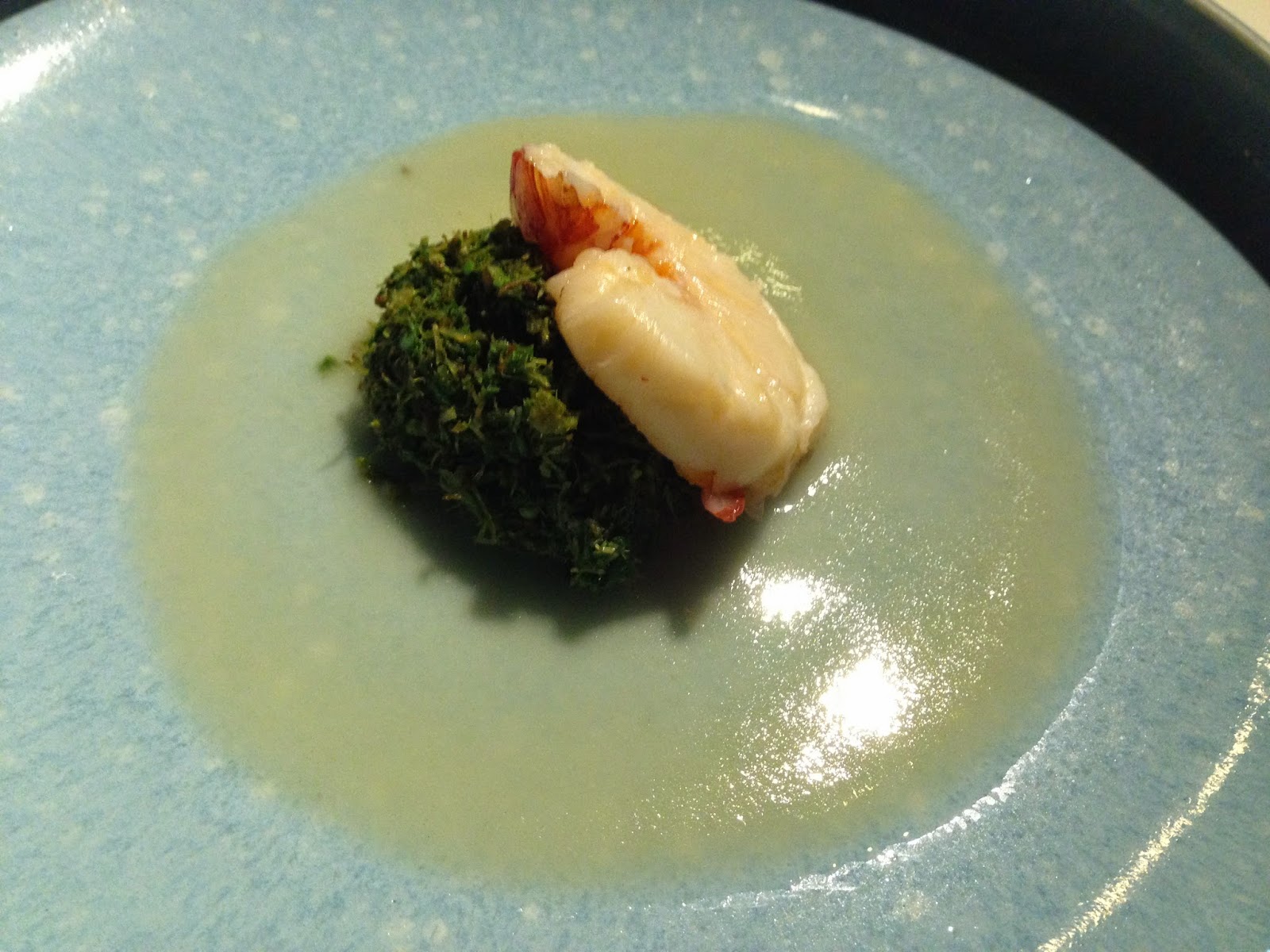 The next dish, also WA seafood, was better.  This was marron served with ground greens and served in a sauce made with pork fat. The sauce was deliciously rich and a good accompaniment to the meaty marron. The greens on this dish were also the only time this evening that the kitchen got greens right. These were flavoursome and added something to the dish, something that can't be said for the rest of the dishes. However, one thing that bothered me about this dish was that it was very salty. The marron was salty, as was the sauce as were the greens. The compounding of similar flavours/tastes was definitely a theme throughout the courses here. You'll see what I mean later on. 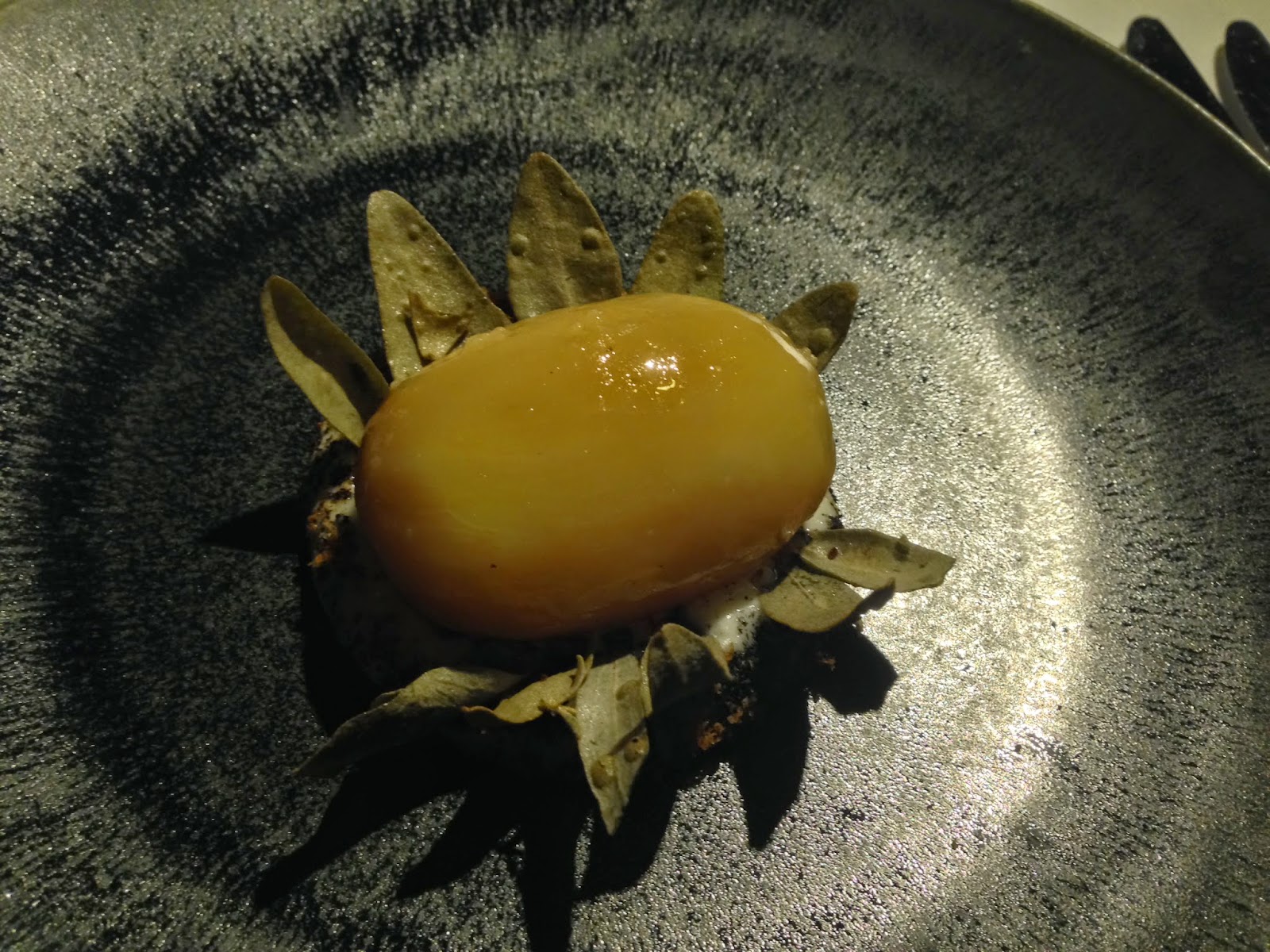 Now we come to probably the closest thing to Attica's 'signature' dish: potato cooked in the earth in which it was grown. Having heard a lot about this dish, we were really looking forward to trying. One taste, however, and we were deflated. Again, not that this dish was particularly bad, it just wasn't not very tasty. The potato, while well cooked, was bland and was actually rather unpleasantly sour whereas I expected it to be beautifully savoury and smokey. Being as you may know a hater of goats curd/cheese, the sauce accompanying it also didn't appeal to me at all. 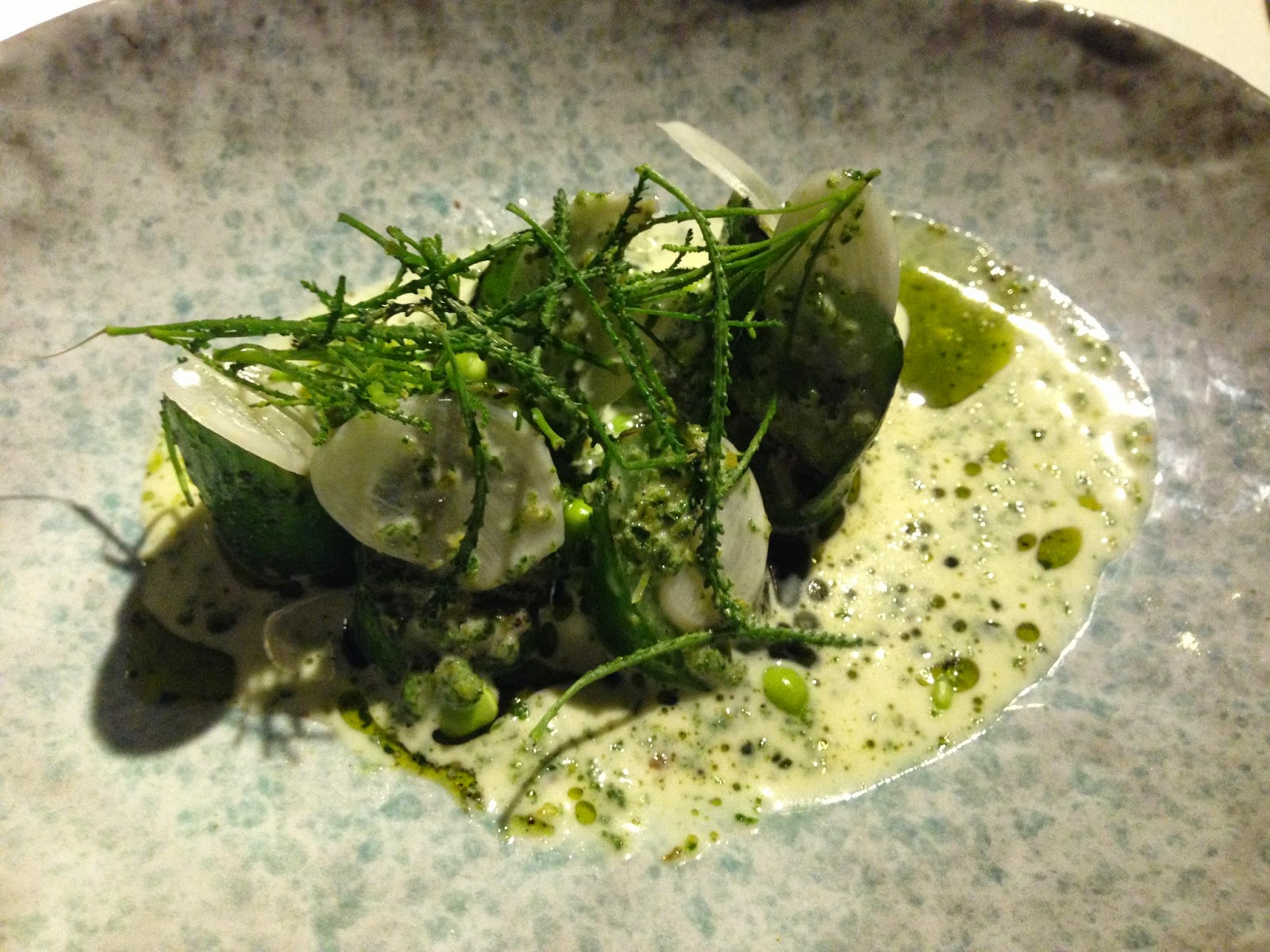 This vegetable dish of cucumbers, sauce of burner and dried trout was better. I believe the cucumber was cooked and it actually tasted very good that way. Most importantly, though, the dish was flavoursome and balanced and the ingredients used all added something to the dish. 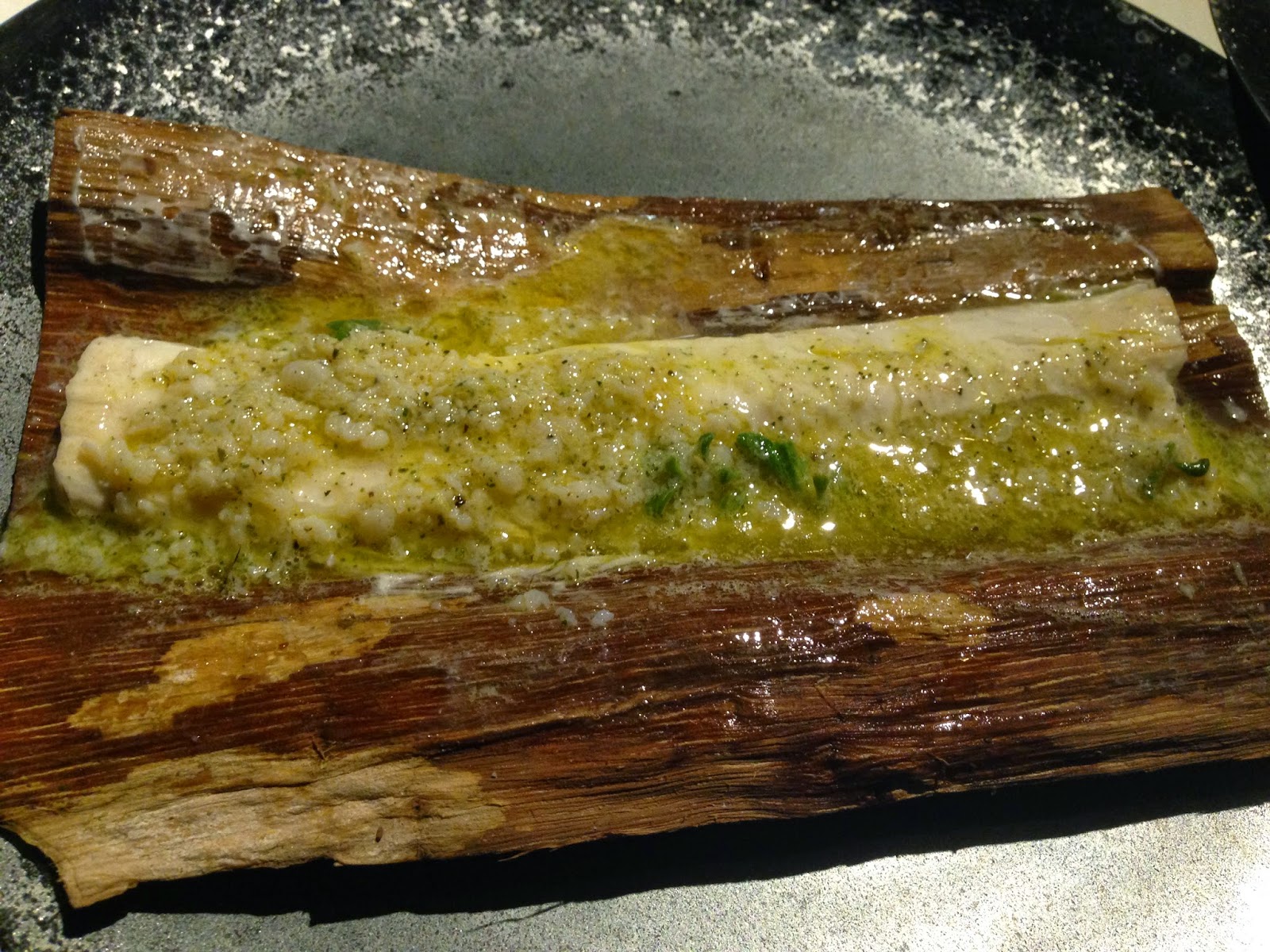 I was also excited for the next seafood dish, King George Whiting in paper bark, a twist on cooking fish en papillote. KGW is another of my favourite seafoods; my dad used to catch them in Perth and they are an excellent eating fish. This dish, however, was pretty disappointing. Frankly, I don't think whiting is a good fish to be cooking skin on en papillote. The reason is the skin of whiting itself, I personally think that whiting skin needs to either be crispy or not eaten at all. This is due to whiting skin developing a rather unpleasant texture when steamed like it does when cooked en papillote. Naturally, the skin on this particular whiting really took away from the dish—a dish which wasn't spectacular in the first place. The oyster butter with lemon myrtle just really just OK. 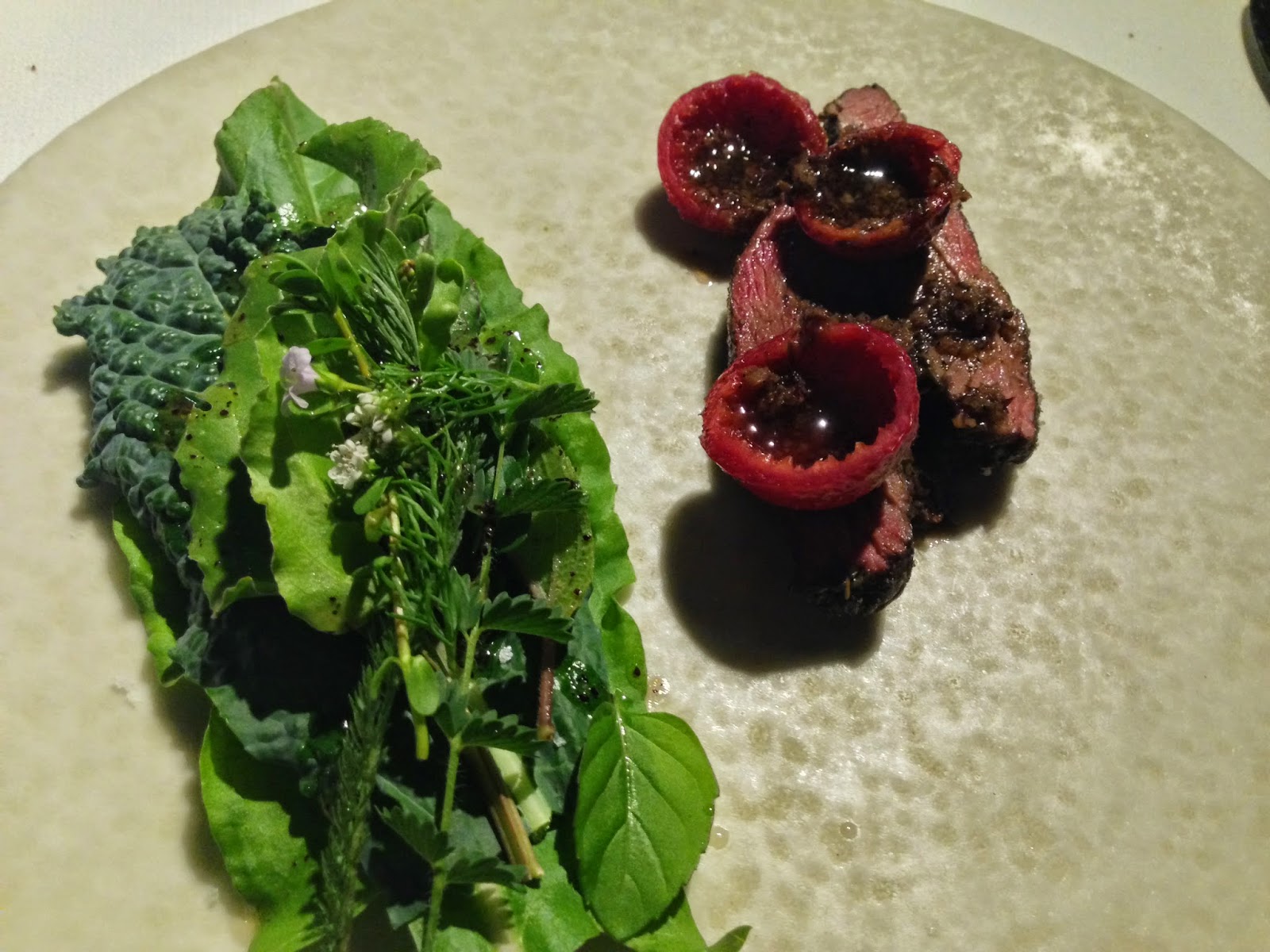 By this stage I was hoping the dinner wouldn't get any worse, but alas, the final three courses ended up being the worst of the night. This dish was kangarro with quandongs accompanied by a selection of bitter greens from the Attica garden. Bitter is definitely the key world here. I am a lover of vegetables of all kinds, including bitter leaves when they are served the right way. This bitter, random pile of leaves from the garden was not the right way to serve anything. I detected very little if any dressing and the result was just bitter leaf after bitter leaf. I think it's great that Attica serves the freshest ingredients grown from their own garden but they also have to be served in a way that tastes good; I get that you are a different kind of restaurant but you are still a restaurant—you still need to serve food that tastes good.

The kangaroo, while well cooked was bland and under-seasoned and I didn't enjoy the quandongs at all, the tartness of which was not a good accompaniment to the kangaroo.

After this course we were taken outside for a tour of their garden. This I was very excited about and I thought it added a very nice touch to the evening. Upon our arrival we were served raspberry licorice sorbet dipped in chocolate. M quite liked this but it was pleasing to my palette at all so I gave mine to him. The garden itself was very cute. The guy let us try a few of their various basils. We both also got excited at seeing alpine strawberries, something we had tried at Tickets. Our waiter's excitement certainly didn't match ours when we explained that we had had them before; he seemed almost disappointed that he wasn't introducing us to a cool new ingredient. 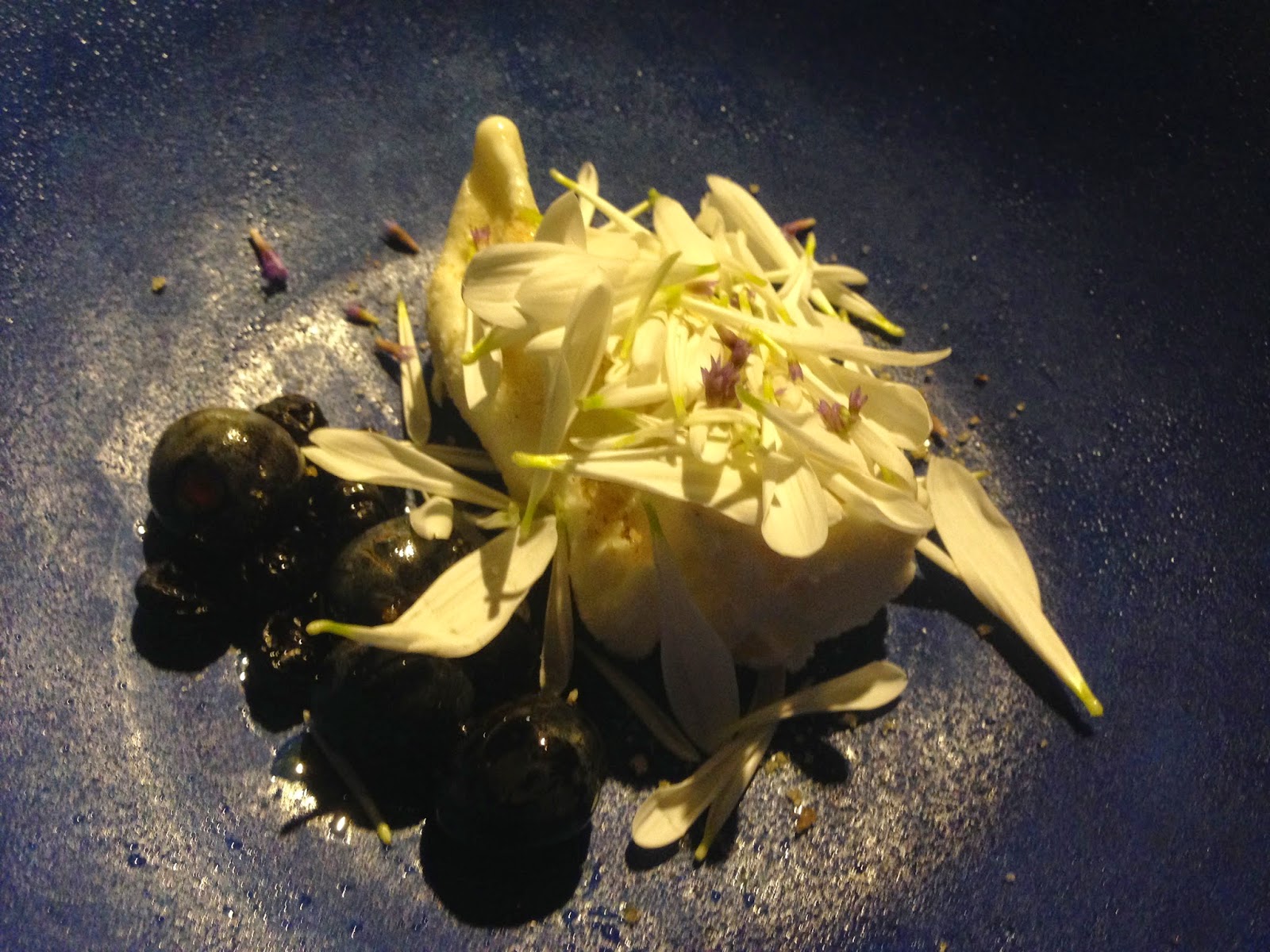 We were hoping for some sweet relief from our desserts but even in this, we were left wanting. This dish was blueberries with vinegar and fresh cheese. I don't mind berries steeped in vinegar, something like strawberries with a bit of balsamic and vanilla can be very tasty and can enhance the flavour of the berry. This is probably what Shewry was going for here but it was wasn't executed well...at all. Blueberries are of course very sour fruits and the addition of vinegar and fresh cheese just made the dish sour on sour on sour. While the creaminess of the cheese should help balance, it didn't go far enough and the tartness of the cheese itself just compounded the sourness. The whole dish just screamed for some sugar. This is legit something I never say about desserts because I really dislike super sweet foods and I find many desserts too sweet for me. This however, was on the opposite end of the spectrum. 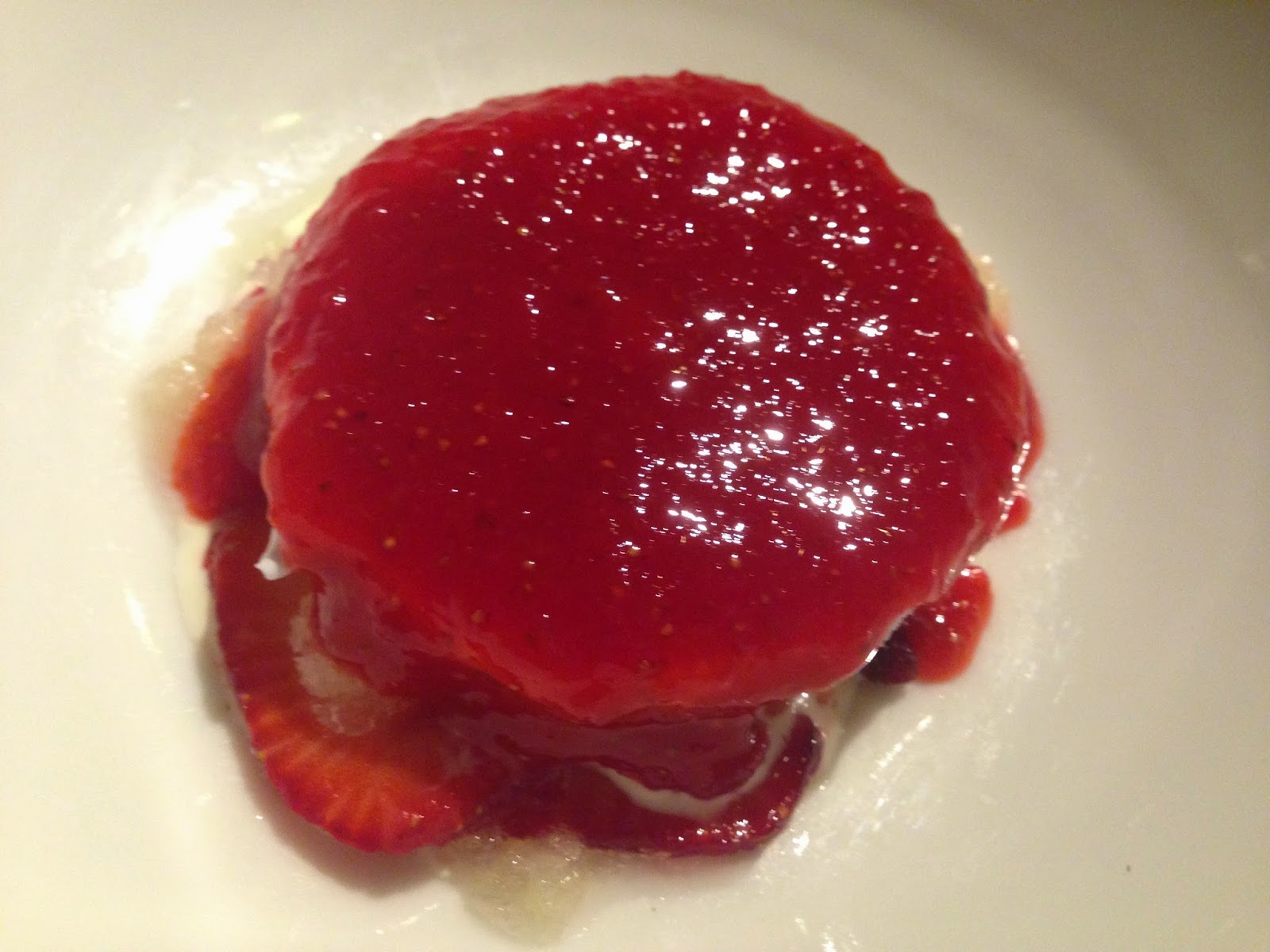 We had a similar problem with the last course of the night: raw strawberry jam. This dessert was at the time replacing Attica's famous plight of the bees. While this dessert was better than the last one, it still wasn't to my taste. The cooking technique of this jam was such that it allowed the chefs to make a jam texture without really cooking the berries, thereby retaining the natural flavour of the fruit. The issue here was that the natural flavour of berries they started with for the jam as well as the fresh berries at the bottom of the dish, wasn't very good. They needed to use a more naturally sweet berry—something like an English strawberry (the which are very pale and almost look under-ripe), difficult but possible to acquire in Australia. As it was with these berries, though, more sugar was needed. The meringue accompaniment helped with the sweetness but the addition of the sour cream again compounded the sourness. Normal fresh cream or something like a creme anglaise would have, in my opinion, been a much better accompaniment. 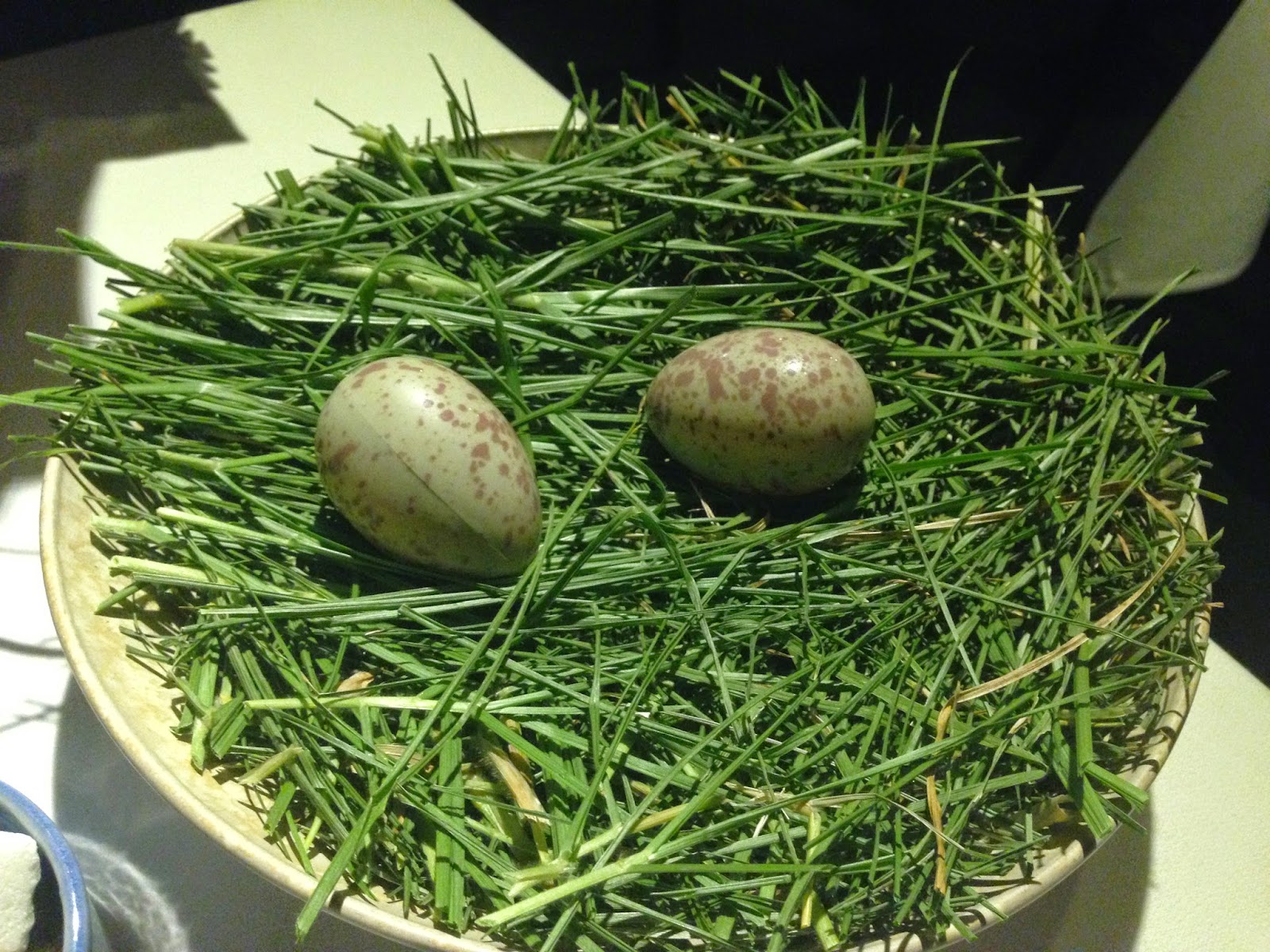 We finished our meal with some chocolate Pukeko's eggs. I personally found these too sweet but M loved them. At the end of the meal I couldn't help but compare this experience to that which we had at The Ledbury. Both restaurants take a similar approach to their food, liking to use seasonal, local, native and somewhat left of centre ingredients and preparing them in a way which is still retaining the natural beauty of the produce. It's an approach I applaud but the problem for Attica is that they do it nowhere as well as somewhere like The Ledbury. Even the service here was lacklustre compared to that of the Ledbury. While it was perfectly polite and professional, it had none of the charm and warmth of the service at the Ledbury. All in all, it's safe to say we won't be back. More for the rest of the world, I suppose.

ETA: one thing I forgot to mention was that they charged us $20 for a MOCKTAIL, the same price as their cocktails by the way. Apparently in the land of Attica the cost of fruit juice is somehow as expensive as alcohol.